Volen Siderov demanded the resignation of Lozan Panov: He should make his own political party!

SJC should insist that he does, it is intolerable the president of the Supreme Court of Cassation (SCC) to dabble in politics, said the chairman of the political party “Ataka” 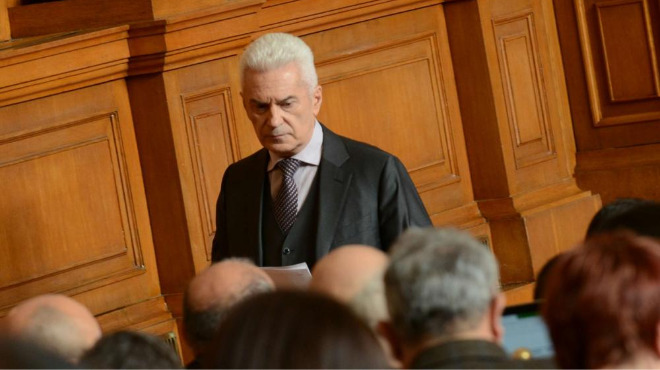 Volen Siderov demanded the resignation of Lozan Panov: He should make his own political party!

Още по темата
A member of the Parliament accused Lozan Panov of national betrayal: Is he a president of the SCC or a politician?
Shorthand records of the SJC revealed WHO sets Bulgaria up in Brussels: Lozan Panov!
Lozan Panov claims that the EU Commission contributes to establishing Nazism in Bulgaria

The Supreme Judicial Council (SJC) and the magistrates insisted that Lozan Panov resigns. The head of “Ataka” – Volen Siderov – wonders why that hasn’t happened yet.

"Lozan Panov should have resigned long ago. It is extremely compulsory that he does that!”, commented Siderov.

The reason was the memorandum of the meetings between the president of the SCC and the EU Commission representatives that report for the Cooperation and Verification Mechanism for Bulgaria and Romania.

"The separation of powers is explicit and is constitutionally anchored. If anyone wants to do politics or create a new political party – he should go for elections, become a member of the Parliament and fight for his political ideas” – this was the advice of Siderov to Panov.

"You simply cannot be a president of the SCC and dabble in politics at the same time! It is intolerable to work against your own country in front of the EU Commission representatives

or any other institutions in Brussels. It is not only him – I remember a member of the Parliament in the right who even took part in proceedings against Bulgaria”, said Siderov. And continued: “All this is not only intolerable – it is way beyond the pale and I have no idea why he keeps his position as a president of the SCC. He should have resigned amid the Apartments affair as it would have happened in any democratic country in Western Europe”

The chairman of "Ataka” added that this is a question of principles and gave an example of what happened to Tsvetan Tsvetanov and Plamen Georgiev. “Lozan Panov cannot be an exclusion”, concluded Siderov.

"He should resign immediately – after that he can create even a political party of his own. The position of both the SJC and the magistrates should be clear – they should insist that he resigns”, invoked Volen Siderov.